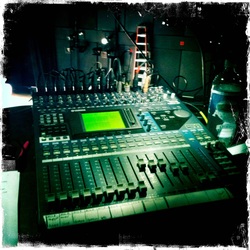 A musician my entire life and the grandchild of a Naval Engineer, who somehow knew how to fix anything, I guess you could say it's in my blood.  I grew up in a family of musicians, singing in choirs, playing several instruments, and attending concerts, plays and musicals from a very early age.  Once I started working in theatre, my focus was everywhere, except Audio.  I always knew I might be a singer/actor/dancer; a stage manager; a lighting designer; set designer; director... you get the picture.  But I never thought, hey, audio!  That's what I want to do!  Nope, not once.

I just kind of fell into audio.  I was out on the road with TheatreworksUSA as a Production Stage Manager.  As part of that job, we all loaded in & out of every venue.  Sometimes with the wonderful help of local crews, IATSE crews, and sometimes it was just us.  My job was also to run sound, and mix the musical.  At first I was hesitant, just learning enough to do a good show.  I quickly became confident, and always wanting the best sound possible, I often chose to patch into the house system and mix from their board.  I took full advantage of the house Audio Engineer and at each venue would watch and learn as much as I could.  Several tours later, and much on the job learning, I found myself mixing an Off-Broadway musical and the designer was impressed with my mix, later asking me to mix other Off-Broadway musicals.  I guess that musician's ear comes in very handy now.  I always love a challenge, and still try to learn everything I can with each new show I mix.  So far, people seem to be very happy and the work keeps finding me.  Had you asked me a decade ago if I did any audio, I would have laughed.  I guess you never know where life's journey is leading you.